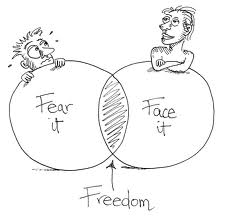 I spied her lurking in the newspaper-littered corner of Paddington Station; sneering, shining, defiant. Beckoning me to her shadowy depths. I paused, taking a moment to look up from my steaming tea mug and catch the full brunt of her steely glare. “So…” I mused. “We meet again.”

My nemesis? The London Underground. All I needed was a leather swivel chair and a cat to stroke malevolently – then my London transport face-off would have been Bond-worthy.

You see it’s been more than a year and a half since I set foot in the London underground system – and I have something of a chequered past with these subterranean trains. I’ve endured multiple panic attacks in-between Oxford Circus and Baker Street. The central line is my own personal synonym for ‘hyperventilation’. Descending the steps at Mile End Station literally feels like my lungs are slowly filling with water.

Over the last five years, every time a bout of depression/anxiety crept into my life the first thing to feel it’s toxic by-products was my ability to make underground journeys across London. Being trapped beneath the city’s streets in overcrowded, pungent and creaking carriages that rattle through darkened tunnels at break-neck speed can be a bit stressful for those in good health. To someone suffering mental health difficulties, it becomes unbearable. The tube is actually a very successful barometer of where I’m at in my battle with the black dog – if I can manage a 40-minute stint in the bowels of the underground then you can bet I’m pretty in control of my adrenaline levels.

I don’t intend on moving back to London. Sure I want to visit every now and then, but I can always get a friend to accompany me underground, or just take the bus instead. So why such a burning desire to conquer my nemesis? They say suffering makes you more resilient and determined; I think that’s just psychologist talk for ‘pain in the arse’. I’m far too stubborn to let my fear of the tube defeat me, even though I could probably find ways to avoid going underground in the future. Depression robs people of so many things, not to mention entire chunks of their life, but I’ll be damned if it alters the way that I choose to travel across my nation’s capital city. I’ll be getting back on the horse, even though my horse resembles a rickety underground train.

Today I had no intention of actually making a tube journey. I was just checking in and saying hello to an old friend. Contemplating the idea of someday soon perhaps taking a very short jaunt along the Circle line. But the fact that I feel ready to even start thinking about getting back on the, er, horse marks a pretty significant stage of my recovery. And for now, that’s enough for even someone as stubborn as me.